On Friday, 13th June 2014, there was a presentation of Rosetta diplomas for all the students who have worked exceptionally well on the Rosetta Stone programme.
From the Primary School 70 students were awarded with Diplomas and they all agreed they have made significant progress with their language skills since using the programme.
Here are some photos taken at the presentation of the students who received the Rosetta Stone diplomas and their classroom assistants. 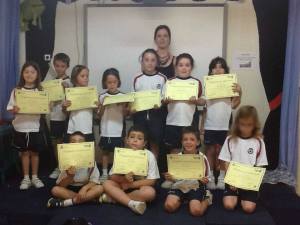 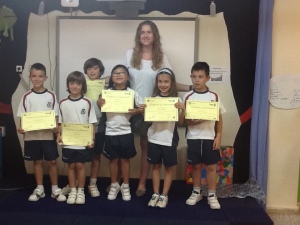 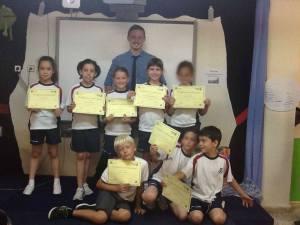 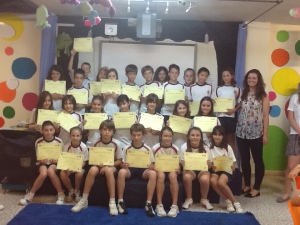 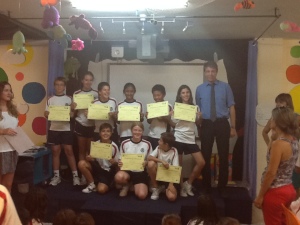 And here is a photo of Francisco Jose Roig with his 2nd Grade assistant Marta and the Rosetta Stone and Additional Language Coordinator Anita Pineda. Francisco won a special prize for completing a whole level of the Rosetta Stone programme. Well done Francisco and all the other students that have worked so well on the programme this year! 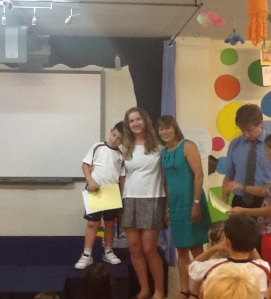 The SEK business expo is about employers that work in businesses. They come and build a stand so that other employers or people can know more about the business.

Two students from 5º went to the SEK business expo:

We discovered that employers of one stand could visit another one. We saw people of different stands going to other stands and explaining things about their business, and then the other stand explaining about theirs (exchanging information between them).

Our opinion is that SEK Business expo is a good opportunity to discover more information about different businesses. It is also a great way for young business-minded people to learn how to run a business. 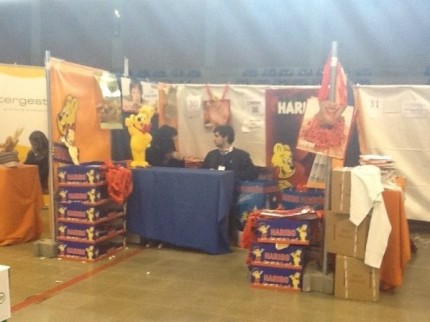 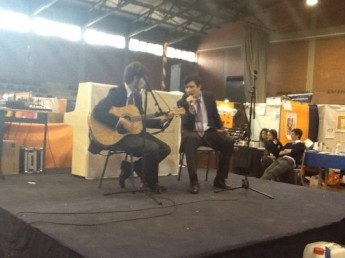 Bachillerato also provided some entertainment during the Business Expo

The fair included 66 businesses and 180 people, with stands displaying products such as: Gummy bears, coffee, ham and many other stalls.
The owners of “Fisioteràpia Clavera” said that it was very good to get to know new businesses, new people, and it´s pretty difficult to improve.
The students Cristina Segú and Rui Ying Ji told us it took two days to prepare and the Christmas holidays to give every stand its determined space. They also told us that is was a mathematical project, saying “If you like it, it´s more like a game than a chore”.
Finally, we talked to Mr. David Delgado and he thought that “Every year we make it a bit better and we work harder too”
We thought that this was a good experience for us because we met interesting people and saw their role in the business they work for.

By: Pol Punsola and Ethan Wilson. 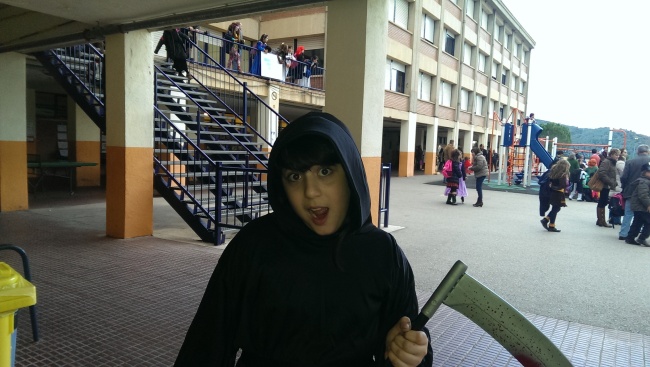 During Carnival week SEK held a photography competition for the students of primary.

Sheila from 4th year sent in a photograph of her costume and said:

“I really liked Carnival, everyone was dressed differently. My fancy dress was scary, my friends were princesses, rockers, pirates etc. Everything was great!”

Well done Sheila and thank you very much for sending your photograph in!

Hope everyone had a great week for Carnival and Semana Blanca!

Look out for our next photography competition coming soon!

La Garriga is preparing to celebrate “Carnival” with fancy dress during the weekend beginning the 27th of February.
In preparation for the “Carnival”, we would like to announce to all PRIMARY students of SEK Catalunya, that we will be running a very exciting competition for all those budding young photographers! The competition is for the best “Carnival” photograph that students send in, which will then be chosen to appear in the SEK Catalunya newsletter. To accompany the photograph, you must include a short description of 60 words. There will be a small prize for the winner of this competition, which also comes hand in hand with recognition for their creativity. So, remember to pack your cameras for “Carnival” and get snapping! We are in for a fun weekend!

FOR A CHANCE TO WIN: SEND IN YOUR BEST PHOTOGRAPH OF CARNIVAL AND A SHORT TEXT (APPROX 60 WORDS) TO: ANGELA.MUNOZ@SEK.ES
BEFORE FRIDAY 7TH MARCH!

On the 21st of January five students of our school went to London.
We went to present our project called ‘Our Dream Classroom’.
We had to present our sound measurements and light measurements that we have been doing around the school.
We have also visited places in London: Tower Bridge, Big Ben and Buckingham Palace, but my favourite was the London eye.
We had lots of fun and learned about new technology.

It’s Chinese New Year and here in our school we are going to celebrate it!

The Chinese use different calendars. The Chinese New year – “Chun Jie” is the most important holiday for Chinese people; it has been celebrated for more than two thousand years.

In these holidays the whole country dresses up and changes. There are mass celebrations everywhere. 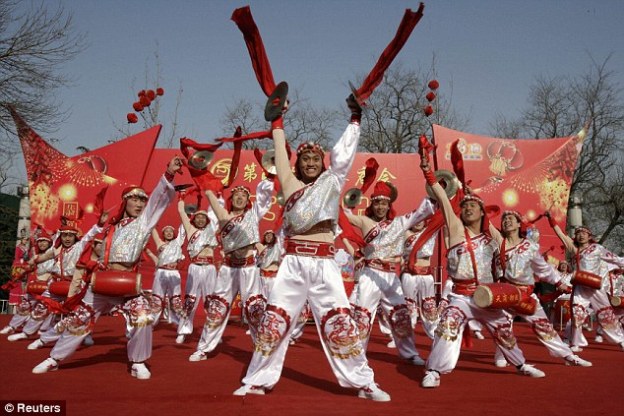 The Chinese New Year is officially celebrated for one week. As a rule, on these days’ shops and the markets are closed.

The whole family celebrate the Chinese new year together. This is why before the date of celebration of New Year in China there is a powerful migration, so if you for these dates plan to visit China, as an advice, keep in mind that on these days it is difficult to get tickets for transport.

By tradition, before a meeting of New Year, Chinese people try to spend as much money as possible for new acquisitions, new things, jewelry and gifts. 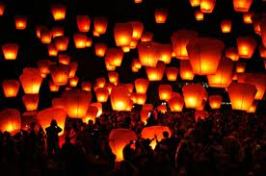 The main color of Chinese New Year is red, because it expresses happiness and it also tells a story:

There was once a village in China and every new year there would be a monster that attacked the people of that village, the people would hide in the mountains so that the monster didn’t attack them.

One day an old lady said she could kill the monster, everyone thought since she was an old she couldn’t. On New Year everyone waited for the monster to come, they waited and waited but the monster didn’t appear so they decided to go to where the monster lived and they found the monster dead on the floor and then they realized the old lady killed him!

They went back and they asked her how did she did it, and she showed them a pile of red objects that she used.

The weakness of the monster was the color red. Ever since, on New Year everyone in China uses red lanterns to protect their house from the monster. (story fromRui Han Ji, 6B) 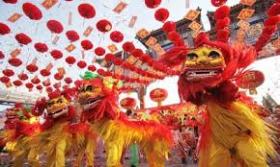 During the week we are going to celebrate Chinese New Year, we will have a series of activities: one of the mothers has decided to teach us traditional oil brush painting, they will also show us how to eat with chopsticks, in art class we will make Chinese lanterns, and finally a student from bachillerato will show us a presentation of what Chinese New Year means.

We celebrate Chinese New Year because we are an international school and we have many Chinese students at school. It is important to us because China is one of the biggest countries in the world and we want to celebrate it with our Chinese students. 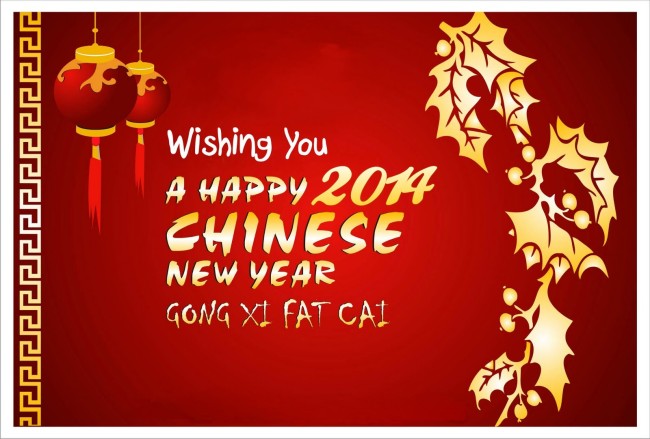 Multiculturism in Spain is nothing new.

The mixture of cultures is a reality that is thousands of years old.

The history of Spain is a history of constant cultural blending. From the Neolithic period to the iron age, it’s all a complex development of different cultures. In 1800 BC the people of El Argar (what is today Aragon) developed bronze technology, which soon spread to other regions in the land. The same happened with language, customs, and habits. All these facts are examples of pure multiculturism.

Later, with the arrival of the Phoenicians, the Romans, and the Greeks cultural mingling became even more significant. This resulted in great cultural advancements in philosophy, art, mathematics, music, architecture, science, and poetry, among other things. Some important examples of the extensive mixing of cultures during this period; the great philosopher Seneca, the Roman emperors Trajan and Hadrian, and the poets Martial and Lucan were all born in Spain (back then called Hispania).

In the Middle Ages there was a strong multicultural cohabitation between the Jews, the Christians, and the Moors, especially in the south of Spain, which back then was called Al-Andalus. 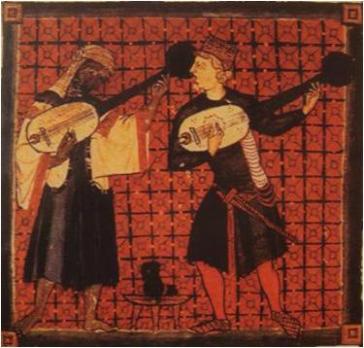 The process of cultural blending continues right up until the present day.  The only fact that has essentially changed is the types of new, incoming cultures and where they’re from.

The new cultures that are influencing our present society have many different origins.  Most significantly these origins include South America and Morocco. But also of growing importance is the effect of the number of people coming from China, Africa, Russia, Pakistan, and India, among others. 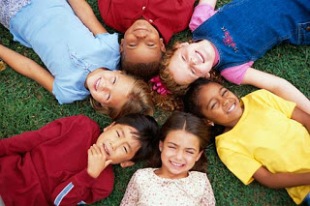 The result of all these new cultural additions is that we aregoing to have a new and dynamic society full of changes. Exactly what kinds of changes will come about and what form society will take is something impossible to know.

What we do know, what history has taught us, is that change in our cultural identity is certain. But the question facing us today seems to be, will these changes in the future make our society unrecognisable? Only time will tell.

In the morning of the 20th of November, all the primary and ESO students went to the playground. Later on some people from each grade got in line to tell us some of the wishes of the students from their grade. Arturo was there to tell the wishes of sixth grade!

Some of the wishes were:

Then the choir (coral) from ESO and Baccalaureate sang a song to us, which was about what they were wishing for and the rights of people around the world.

After, Miss Mireia, Mr. Hudson and other teachers talked to us about why some children are dying at the moment and that everybody should be able to go to school so they can learn like us. They said that we are very lucky in this school because we have got food and water almost everywhere!

The International Children’s Day is celebrated in all countries and it started in 1925.

Last Wednesday was a presentation of languages diplomas, there were three types: English, French and German.

There were lots of students from ESO and Bachillerato. The presentation was presented by the school director, Philip Hudson, the sub-director, Jordi Ros, and the languages teachers. 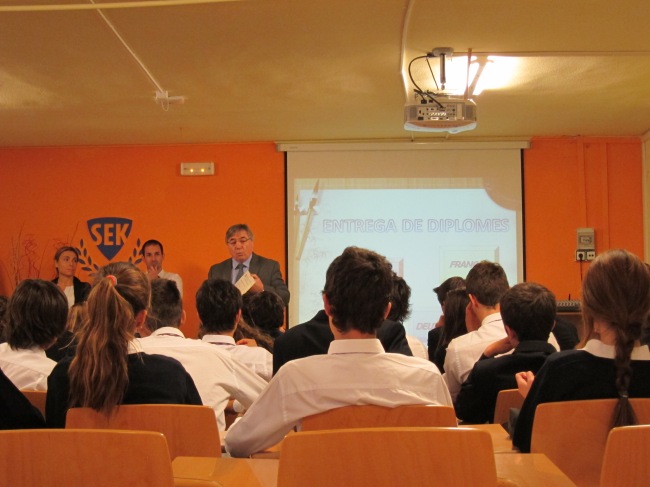 The presentation started with the director talking about the importance of knowing languages for your future.

After this, the French teacher started awarding diplomas to the French students. 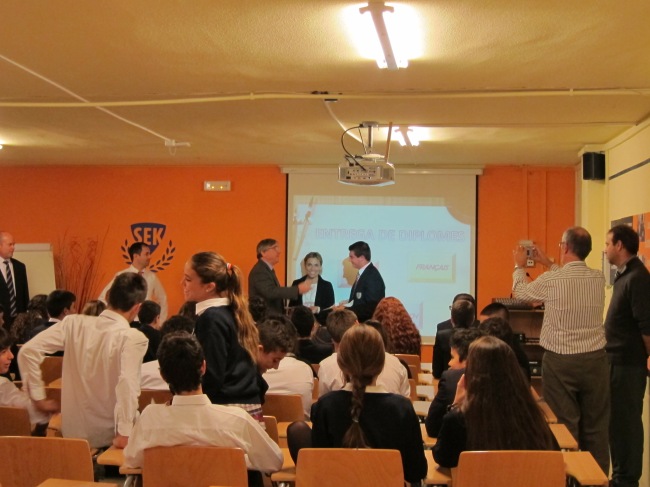 These lucky students received the diplomas because they have worked hard and passed the international exams.

Later, the English and German teachers also awarded their students.

These diplomas were from the Cambridge exams, the Goethe Institute exams and the Alliance Française. 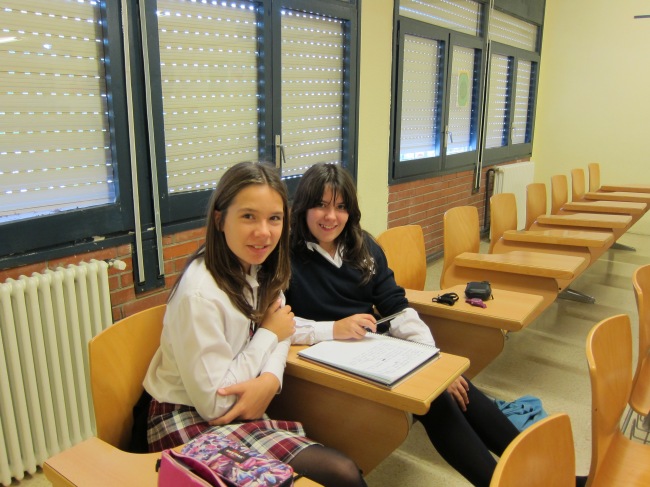